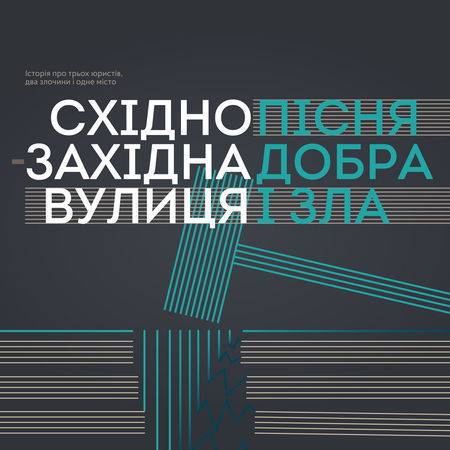 East West Street. A Song of Good and Evil.

A story of three lawyers, two crimes and one city!

A musical drama performance based on the world-wide bestseller "East-West Street" сreated by Philippe Sands, a lawyer who participated in some of the most known international court cases for the crimes of genocide and human rights violation. It offers a new perspective on the Nuremberg Trial and the history of modern international law through the lens of life stories of three lawyers.

This is a story about two graduates of university in Lviv: Hersch Lauterpacht and Rafael Lemkin. They invented legal terms for the most terrible crimes of the 20th century – "crime against humanity" and "genocide." And a story of the third one, Hans Frank, the governor-general of occupied Poland, who was charged with them and found guilty in them. These men, separated by the bar and by their actions, admired similar music. In music they found comfort in the most difficult moments of their lives. The performance invites you to an unknown story that changed the city, international law, and the modern world.

Produced by Nina Brazier, one of the leading opera directors of contemporary Great Britain. With the participation of Philippe Sands, a lawyer and author, and Katja Riemann, a star of German cinema, accompanied by music by Bach, Beethoven, Rachmaninoff, Paul Misraki and Leonard Cohen performed by Laurent Naouri (bass-baritone, Metropolitan Opera) and Guillaume de Chassy, a well-known jazz pianist (Paris).

With special participation of Emmanuel Ax, a world known pianist and seven-time Grammy winner. Mr Ax will join the performance only once, returning to the city where he was born and began musical education.
http://www.lvivcenter.org/uk/chronicle/news/2555-17-11-11-west-east-street