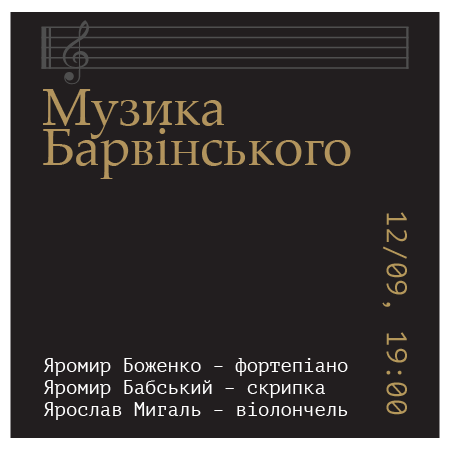 He was called "composer without music". Basil Barvinsky, one of the founders of the West Ukrainian Music School, was sentenced by the Soviet regime to 10 years of Mordovian camps. All his manuscripts were burned down in the courtyard of the conservatory, where he worked. After liberation, Barvinsky devoted the rest of his life to the restoration of his works, but not everything returned from the ashes.On September 12 in the Lviv Organ Hall there will be a concert of chamber music by the composer, whose name has been trying to erase from history for 40 years.
Pianist Yaromyr Bozhenko, violinist Yaromyr Babsky and cellist Yaroslav Mihal will play.Yaromyr Bozhenko is a Lviv pianist who has been living and teaching for a long time in Germany. He actively popularizes Ukrainian music in Europe. "Ukrainian music is in no way inferior to the European, and its saturation with the folk melody of the most singing nation in the world makes it original and non-standard," says Bozhenko.
Yaromyr Babsky studied in Lviv, and then polished his skills in Vienna. Winner of numerous international music competitions, played on many scenes of Europe and the USA. Since 2011 Yaromyr Babsky is the first violin in the Tonkunstler orchestra in Vienna, is a head of a private music school in the Austrian capital. The violinist actively popularizes Ukrainian culture in Vienna. He is one of the founders of the Ukrainian Youth Association in Austria, which holds charitable events.
Yaroslav Mihal is a legendary Lviv cellist, founder of the chamber symphony orchestra "Leopolis" and the same name trio. Actively concerts as a soloist and participant of chamber ensembles. Yaroslav also makes a lot of effort to bring the works of Ukrainian composers to the audience around the world. In particular, the recording of the Bortniansky’s "Alcido" performed by his ensemble was featured in the United States and Europe.
Yaromyr Bozhenko - piano
Yaromyr Babsky - violin
Yaroslav Myhal - cello
V. Barvinsky:Sonata for piano Des / Cis-dur
Dumka
Nocturne
Melody for cello and piano
Trio a-moll for violin, cello and piano
Tickets are available:
- in the box office of Organ Hall daily from 1 p.m. till 7 p.m.
- online at Gastroli.ua - https://gastroli.ua/places/235
- in over 20 box offices around Lviv
- https://gastroli.ua/network (age restriction: 7+)
For additional info call: 098 871 0180
Buy tickets on Music by Barvinsky (Львів, 12 September 2018)