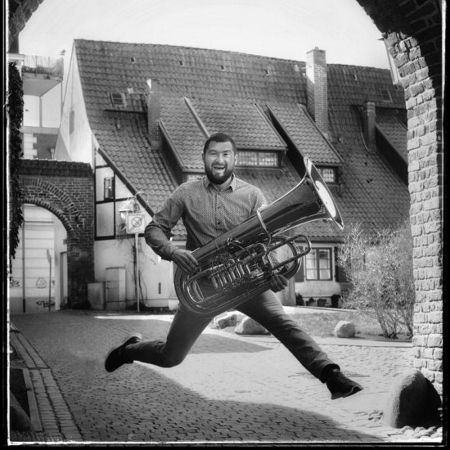 Jumping in time with Tuba

Let's jump! In time With tuba! This instrument does not seem too graceful. But you will not believe your ears when you hear the play of Olexander Yushchuk. With the accompaniment of the pianist Arkadiusz Godziński, he will perform original works for the tube and his own processing. We will jump out of Benedetto Marcello, who lived in the 18th century to our contemporary Krzysztof Penderecki. It will be fun!

Oleksandr Yuschuk is a young Ukrainian musician who began his career with accordion in 10 years and took the tuba into his hands for 15 years. Since then, he has ceased to open new horizons with Lviv National Music Academy, Frederic Chopin Music University in Warsaw, Higher School of Music and Theater in Rostock (Germany). Repeatedly rewarded for his creative activity. Received the reward of the mayor of Lviv. He collaborated with the K&K Philharmoniker, Sinfonia Varsovia, Lviv Symphony Orchestra and others. As a soloist and member of the orchestra performed in many cities of Poland, as well as in Europe (Germany, Spain, Norway, Switzerland, Sweden, Belgium, Netherlands, Luxembourg, Austria, Denmark, Greece.)

Arkadiusz Godziński is a Polish pianist, studied at the Music Academy of. S. Moniuszko in Gdańsk and at the Higher School of Music and Theater in Rostock (Germany). He received a scholarship from the Minister of Science and Education of Poland for exemplary study. Laureate of international competitions. He played with Poland's outstanding conductors and orchestras.

Duration of the concert: about an hour