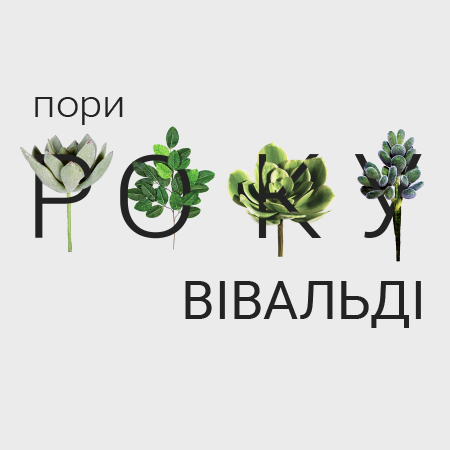 Four Seasons. Vivaldi and other beauty
The true genius of music is one whose works will sound beautiful, melodious and, importantly, modern in any age or millennium. One such genius is Antonio Lucio Vivaldi. Indeed, this composer managed to create perhaps the most popular piece of music in the history of classics. We offer you a conceptually new interpretation of Vivaldi's famous "Four Seasons" by a professional organist who has been winning the hearts of Lviv residents with the best and greatest instrument in Eastern Europe for 20 years. Nadiya Velychko is always open to something new and knows how to create true miracles on stage. Together with the violinist Liliya Hratylo, they prepared an evening of beautiful music you can even sing to!

Nadiya Veluchko was born in Lviv. She graduated from the Krushelnytska Lviv Secondary Specialized Boarding Music School and Lysenko Lviv National Musical Academy. In 1999-2003 she was an assistant-intern at the Ukrainian National Tchaikovsky Academy of Music in Kyiv as concertmaster and organist (class of Professor G. Bulibenko).
Since 2001, she has been working at the Lviv House of Organ and Chamber Music. She has participated in the Contrasts festival, the Millennium Music festival and the Ancient Music Festival in Lviv.
In 2003 she performed in Germany. In 2009, she went to the Organ Academy in Leipzig and took courses taught by renowned organists such as J. van Oortmerssen, J. L. Zender, J. Laukwick, and in 2010 she perfected her craft at the International Organ Academy in Haarlen, the Netherlands, under the guidance of such masters like  L. Giemi (Italy), V. Cerer (Germany), B. Vinceumius (Netherlands).
In July 2011, she enrolled in a master's program at the Department of Ancient Music of St. Petersburg State University.
In March 2011, she performed in Baltimore, USA. She participated in the International Academy of Organ and Clavichord held in Smarano (Italy) and Roskilde (Denmark).
Her permanent repertoire includes works by J. S. Bach, G. F. Händel, D. Buxtehude, J. Pachelbel, S. Franco.
In July 2012 she received a diploma with distinction from the Eighth International Organ Competition Fano Adriano (Italy).

Together with the violinist Marko Komonko, they prepared an evening of beautiful music you can even sing to!