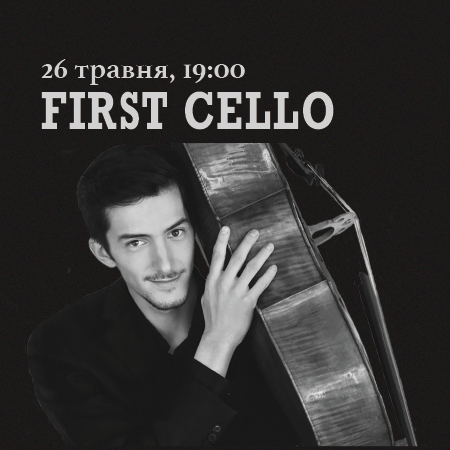 For the first time in Ukraine! One of Europe's best cellists, concertmaster of the Berliner Philharmoniker. Bruno Delepelaire with the only concert in the Lviv Organ Hall.
Bruno has an impressive career. Having won several prestigious awards, including "Karl Davidoff International Cello Competition" (2012) and Markneukirchen International Instrumental Competition (2013), he became a member of one of the world's most famous orchestra.
Together with the principal guest conductor of the Ukrainian Festival Orchestra, Theodore Kuchar, he is ready to win the hearts of Lviv people on May 26.

Easy and positive music will fill the Organ Hall at this May evening: Suk, Mozart, Haydn, Mendelssohn. Suk’s Serenade for strings is cheerful and sunny piece. This mood will be present during whole concert. Symphony No.15 by Wolfgang Amadeus Mozart and D Dur Cello Concerto by Joseph Haydn - pure Viennese beauty. And a pleasant musical meeting will end with a short Symphony No.10 by Felix Mendelssohn.

Bruno Delepelaire owes the fact that he became a cellist to his grandmother, an enthusiastic amateur cellist. As a five-year-old, he also wanted to learn the instrument. The cello lessons with his first cello teacher Erwan Fauré were formative experiences for him. Bruno Delepelaire later studied at the Paris Conservatoire under Philippe Muller. In 2012 he went to Berlin to continue his training under Jens Peter Maintz at the University of the Arts and under Ludwig Quandt at the Orchestra Academy of the Berliner Philharmoniker.
Bruno Delepelaire gained orchestral experience with the Verbier Festival Orchestra, the Gustav Mahler Youth Orchestra, and as a student of the Orchestra Academy of the Berliner Philharmoniker. The cellist has won several awards, including the first prize at the “Karl Davidoff International Cello Competition” (2012) and the Markneukirchen International Instrumental Competition (2013). Bruno Delepelaire has been principal cellist with the Berliner Philharmoniker since 2013.

The multiple award-winning conductor Theodore Kuchar is the most recorded conductor of his generation and appears on over 110 compact discs for the Naxos, Brilliant Classics, Ondine and Marco Polo labels. Mr. Kuchar’s longest titled affiliation and relationship is with the National Symphony Orchestra of Ukraine, of which he was appointed the Artistic Director and Principal Conductor in 1994. They have appeared together in over 300 performances, in Kyiv and on tour on four continents while their discography totals over 70 compact discs. Most recently, they completed a 44-concert tour of North America under the auspices of Columbia Artists Management in January-March, 2017. He has served as the Principal Conductor of major orchestras in Australia, Europe, South America and the United States of America.