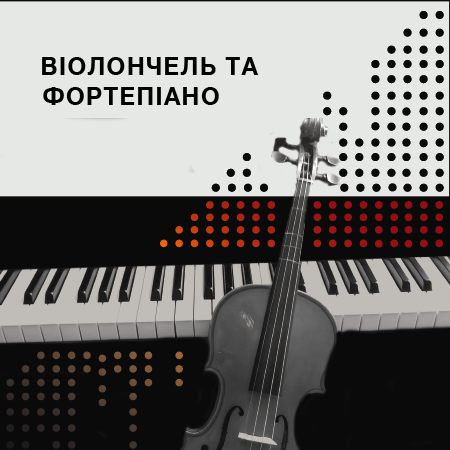 Cello's chamber and velvety sound filled the entire space of the Organ Hall... The soulful accompaniment of the piano echoes and complements each note. Step by step, move by move. Emotions that fill you up just like a glass is filled with good wine.
On this summer day, cellist Maksym Rymar and pianist Ivan Ostapovych will perform music by Vivaldi, Dvořák, Glière, Debussy and Pärt.
Maksym Rymar — cello
Ivan Ostapovych — piano
About the performers
Maksym Rymar
He began his musical education at the age of four. Only three years had passed he had already won first awards at Ukrainian and international competitions.
In 2006, he represented Ukraine in the CEI-Youth Orchestra, conductor Igor Coretti Kuret; From 2007 to 2009, he was a concertmaster within the cello group. Maksym performed solo with the chamber orchestra at the European Parliament (Brussels, Belgium, 2008).
He obtained higher education at the National Tchaikovsky Music Academy of Ukraine (2007-2012, Master's Degree with honors).
He visited 39 countries of the world from Canada to Japan both as a soloist and as a member of musical bands.
Maksym participated in workshops with Professor Claudio Casadei (Italy) in 2008 and in workshops with Professor Leonid Gorokhov (Germany), the latter being hosted by “Vere Music Fund” in 2019.
He collaborated with the following conductors: Riccardo Muti, Igor Coretti Kuret, Georg Kugi, Martin Kershbaum, Paul Mann, Daniel Hanson, Paul Henry, Dmitry Yablonsky, Volodymyr Sirenko, Volodymyr Syvohip, Mykola Diadura, Allin Vlasenko, Oleksii Baklan, Alla Kulbaba, Volodymyr Kozhukhar, Victor Oliynyk, Herman Makarenko, Tetiana Kalinichenko, Ivan Cherednichenko, Volodymyr Solonko, Yuri Litun, Ivan Ostapovych.
Some of the groups he played in: member of the “Telniuk Sisters” cello trio, the “Kyiv Virtuosos" orchestra, CEI-Youth Orchestra (Italy), the orchestra of the National Opera of Ukraine (Kyiv), the “New Era Orchestra,” the “Kyiv Baroque” ensemble, the “Collegium Kyiv” orchestra and others.
He cooperates with the Lviv Organ Hall and Mirror Hall of Lviv National Opera as a soloist.
Maksym works at the National Opera and Ballet Theater of Ukraine (Kyiv) since May 2019.
Ivan Ostapovych
Ivan Ostapovych is a conductor, composer and Director of the Lviv Organ Hall. He plays both the piano and the organ.
He studied at the S.Krushelnytska Specialized Secondary Music Boarding School and continued his studies at the National Tchaikovsky Music Academy of Ukraine at the Department of Opera and Symphony Conducting. He graduated from the M. Lysenko National Musical Academy — class on bassoon and composition taught by B. Froliak.
He worked as the second conductor of the Ivano-Frankivsk Regional Philharmonic. He is the author and initiator of the Collegium Musicum Lviv project-platform (now Collegium Management). Concerts with the participation of not only young talented Ukrainian performers, but also the best musicians of the world have been held in Lviv since 2012 within the framework of this project.
He is the founder and conductor of the Ukrainian Festival Orchestra, which performed with such world stage stars like violinist Midori and pianist Vadym Kholodenko.
He is the co-founder of the Ukrainian Live project designed to promote Ukrainian classical music. He is also the co-author of programs on Radio Skovoroda and Deputy Director of the Galician Musical Society.
He performed with the National Symphony Orchestra of Ukraine, Rivne Philharmonic Chamber Orchestra, Ternopil Philharmonic Chamber Orchestra, INSO-Lviv Symphony Orchestra, Cantus Chamber Choir (Uzhhorod).

Duration: about an hour
Please note that the number of tickets is limited and wearing a face mask is required due to the quarantine rules!
On quarantine restrictions, etc.:
Resolution of the Cabinet of Ministers of Ukraine No. 392 as of May 20, 2020 (as amended on July 8, 2020) — on easing of quarantine requirements in the sphere of culture
Protocol No. 30 of the Regional Commission on Technogenic and Environmental Safety and Emergencies  — “Activities of cultural institutions with capacity of more than 50% of stationary seats and/or more than one person per 5 m2”
Buy tickets on Cello and piano (Lviv, 02 August 2020)